Ok, honestly i don’t know where to start..now i know the whole story.
We all know how this fairytale ends: i said Yes.
But the process is maybe more “interesting” (in the good way).
Last vacation we went to Asia.
It was such an amazing continent, i’d love to go back someday.
In the classic storyline you would expect he was going to proposed to me at Bali.
A perfect place with beautiful scenery.
Think of sunset, beaches and all other romantic getaways.
Well, it was all part of the plan, his plan.
But it didn’t turned out that way…..

However he had everything well planned and (how far possible) scheduled,
he couldn’t find the perfect moment.
And that word “perfect” was just the right word that bothers him the whole “proposal process”
(need to mention: i’ve said several times,
IF ‘someone’ proposed to me..it had to be huge and special!
so maybe i made him a bit insecure :p).
He’s such a perfectionist (great match) so he had a plan A, B, C, D and just in case a plan E.

Let start with plan A, purposing at Ubud. Just somewhere at a calm and relaxing place.
Didn’t worked out because he couldn’t find the right moment.
And he had always still a plan B, Sanur.
So plenty of time to find a perfect place or moment.

Sanur it is. He had the engagement ring (14 KT) hiding between his boxershorts.
So the ring went already international and passed a lot of borders.
He carried ‘it’ in his suitcase (with the risk the suitcase could be lost).
He was affraid, if he took it with him in his carry-on luggage,
that he needed to clear his bag at the immigration.
And this was certainly the right choice,
in London his bag was picked out and i (as curious that i am) could see everything what’s was in his bag ;).

Altough everything was arranged and settled,
Sanur wasn’t the ‘perfect’ timing either.
This time, not because his behavior of procrastinating,
but something else was the reason to blow off plan C & D (C and D had both to do with Sanur).
That something called an “inflammation”.
This was really a scary part of my life.
I woke up and my right eye was irritated, tearing and my sight was very blurry.
Not the best conditions to be purposed,
you definitely want to see the person who’s sitting on one knee in front of you.
So there goes plan A, B, C and D.
Plan E was the proposal after our Asia trip, in Holland.

So The Netherlands it is, he planned a “bear day” at 8/8.
Bear day is referred to my nickname Bear.
My family and friends are calling me bear since ages.
He said, at bear day we are going to do things that Bear likes to do.
So he baked waffles for me (om my gosh i love waffles!!), just like Flapjaks Bali.
So the day started terrific.
He was all dressed up, fancy and things ;).
Mr. Handsome had a mission today.
He took the Nikon and the tripod with him.
After breakfast we’ve been to Alkmaar for shopping.
Then again he had a surprise, i could pick an item and he would pay for it.
Normally i don’t like it very much when he pays an item for me (something with independent women etc).
Anyway i saw a perfect dress for an upcoming wedding,
not too expensive because i didn’t wanted that he would be broke right away.
After shopping we shot some pictures at the Beach (Egmond at sea, soon online).
But he wanted to take also pictures of us together in the dunes.
So, he switched on the timer of the Nikon.
After taking some cliché photo’s he asked me if i could close my eyes.
I thought that was a bit AWKWARD, so i was suspicious from that moment on.
In 10 sec. something has changed.
I opened my eyes and there he was sitting on one knee with a fabulous shiny ring.
At that moment the camera took a picture (timer).
I’m not sure if he likes it if i will tell you this,
but he was sooooooooo nerveous, he totally forgot what to say next.
He blacked out, there it goes all the perfect moments, speeches and other scheduled thoughts.
Eventually he asked me to marry him, OFCOURSE; YES. 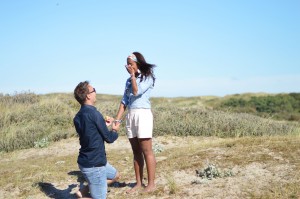 I was so overwhelmed and i didn’t exactly knew what to say after his proposal.
The only reasonable thing i could say was: our parking ticket would be expired.
Seriously is was talking about parking?!! haha.

For me it was The perfect proposal, i’m still enjoying this precious moment. 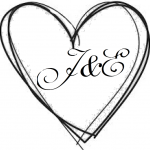 Ps. He didn’t told anyone about it and wanted to do it without public, just the two of us.
He’s among the 69% of people who want to do this private. Quite ironic right.
We, well i, share a lot with the world so this was from another point of view.
But ofcourse in wanted to share this moment someday ;)………………….. 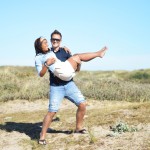 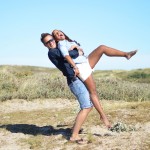 About the Author: Esmeralda

Main author of Esmeraldaattema.com.
2piece and temples
I love to dressup!

I love to dressup!

Hi lovely reader, Oh my i need to get back to work today. How longer a vacay takes, how harder...